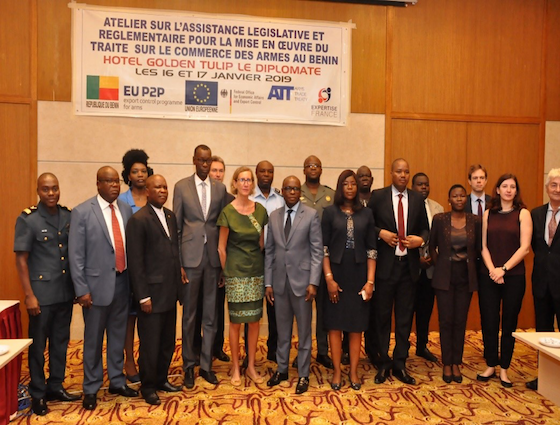 As part of the EU ATT Outreach Project,  Benin, with the support of Expertise France, hosted the first workshop of its assistance roadmap on January 16-17, 2019, in Cotonou. For this event, Expertise France selected a team of three experts (from France and Burkina Faso), joined by two additional national speakers invited by the local partner, the Ministry of Foreign Affairs and Cooperation of Benin. Attended by 15 representatives of the main actors involved in the implementation of the ATT in Benin (the Government, the National Assembly, the judiciary and civil society), the workshop gave an opportunity to discuss ongoing relevant legislative initiatives, notably a draft law covering the ECOWAS Convention on small arms and light weapons (but also incorporating some elements of the ATT such as the categories listed under article 2). The experts shared best practices and technical advice before the Beninese partners will start working on a new preliminary draft law, and its decrees, integrating further ATT obligations in the legislation, including:1) The creation of a national control system regulating all the transfers of conventional arms referred to under article 2; 2) The designation of competent national authorities; 3) The establishment of a national control list.

The goal of 'EU ATT Outreach Project' is to support the early entry into force and effective implementation of the ATT. Upon request, the project supports a number of States in strengthening their arms transfer control systems with a view to being able to implement the ATT. The project also aims to increase awareness and ownership of the ATT at national and regional levels and therein contribute to its universalisation. A second edition of the project was initiated on 29 May 2017 by Council Decision 2017/915 and it is co-implemented by BAFA and Expertise France. The EU ATT Outreach Project has three different components: 1) Tailored National Assistance Programmes; 2) Ad-hoc Activities; and 3) Regional Seminars. National assistance programmes are developed in close cooperation with partner countries. Key elements of national assistance programmes are: an initial needs assessment visit; inclusive roadmap development; and, practical support follow up activities.