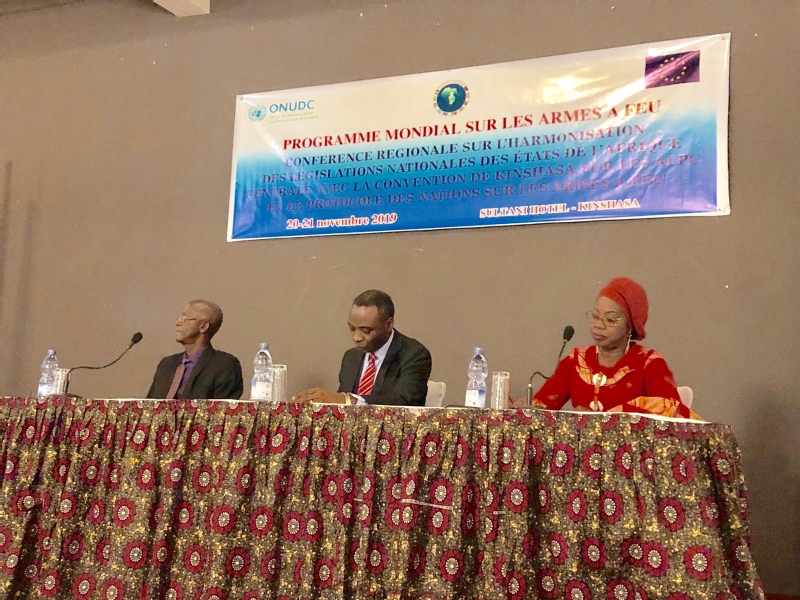 On 20-21 November 2019, UNODC, through its Global Firearms Programme (GFP), jointly with the Economic Community of Central African States (ECCAS) organized in Kinshasa, Democratic Republic of Congo, a regional conference for Central African countries aimed at analysing the synergies and complementarities between the Firearms Protocol and the Kinshasa Convention on Small Arms Light Weapons (SALW), but also other international instruments such as the Arms Trade Treaty, the UN Programme of Action on SALW and the Nairobi Protocol on SALW.. The activity was made possible with the financial support of the European Union.
The Kinshasa Convention entered into force in 2017 and since then there have been national and regional efforts aimed at supporting the implementation of the instrument. UNODC and ECCAS have seized this opportunity to analyse the need for harmonization of national legislation of arms in the sub region, given that several countries are parties not only to the Kinshasa Convention and the Firearms Protocol, but also to other international instruments such as the Arms Trade Treaty, the UN Programme of Action on SALW and the Nairobi Protocol on SALW.
National experts from eight Member States in the sub region also had the opportunity to present their existing national frameworks. The interactive approach of the conference facilitated the exchange of views and experiences of Member States on the obstacles encountered so far with the implementation of the international legal instruments on arms. These discussions helped to identify the specific technical assistance needs in terms of legislative development. Follow up actions to support current reform efforts in the countries were discussed. UNODC is in discussions with various countries in the sub region to see how it can support the development of updated and harmonized legislation. Since 2018 UNODC has been working with national authorities in Chad and in the Central African Republic on the drafting of updated laws and regulations.
The conference brought together representatives from Burundi, Cameroon, Central African Republic, Chad, Democratic Republic of Congo, Equatorial Guinea, Gabon and Rwanda. In addition, it also counted with expertise and advice of representatives from the Regional Centre on Small Arms (RECSA), UNREC and the United Nations Regional Office for Central Africa (UNOCA), which acts as the Secretariat of the United Nations Standing Advisory Committee on Security Questions in Central Africa (UNSAC), which is aimed at carrying out "reconstruction and confidence building activities among its Member States, including through confidence-building and arms control measures".

The activity was carried out in the framework of the EU-funded project "Countering transnational illicit arms trafficking through the implementation of the United Nations Convention Against Transnational Organized Crime and its Firearms Protocol".

Democratic Republic of the Congo