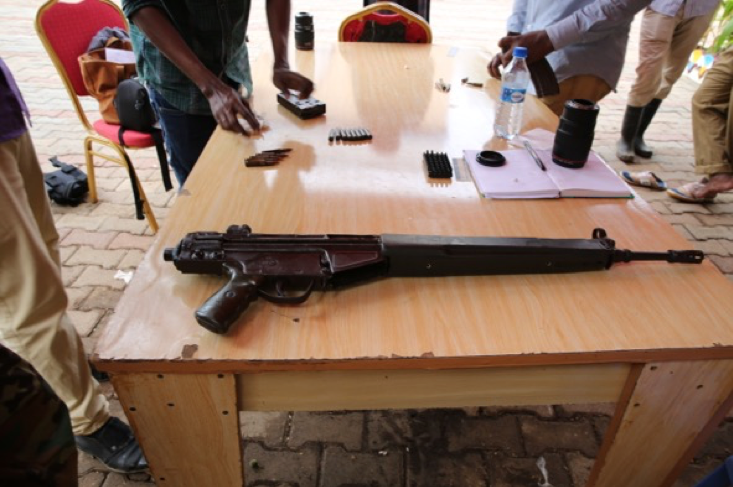 As part of the Somalia Security and Justice Programme (SSJP), CAR is undertaking a number of activities aimed at improving the accountability and management of assets by the Somali Police. These include: 1. Support the UN Security Council Resolutions 2182 (2014), 2244 (2015), 2317 (2016), and 2385 (2017); 2. In partnership with the Federal Government of Somalia (FGS) Office of the National Security Advisor (ONSA), undertake the UNSC-mandated Joint Verification Team (JVT) missions to conduct routine inspections of government security forces’ stockpiles. The JVT methodology includes armoury assessments and spot-checks of imported weapons and ammunition that have been deployed to Somali armed forces; 3. Design and implement a practical weapon and ammunition management (WAM) system, including recordkeeping, that will enable the FGS and its Federal Member States (FMS) to systematically safeguard their weapons and ammunition at all levels of issue, receipt, and storage; 4. Conduct a needs assessment of all FGS and FMS arms inventories to establish a comprehensive understanding of FGS and FMS weapon holdings relative to the size of their forces; 5. Support local defence and security forces, including the African Union Mission in Somalia (AMISOM), to document, record and trace captured/surrendered weapons and ammunition; and, 6. Establish, train, and mentor Weapon Tracing Teams (WTTs) within FGS and FMS security forces, to confidently and transparently identify, document, and record captured materiel.

The Somalia Security and Justice Programme (SSJP) is a programme funded by The Government of the United Kingdom of Great Britain and Northern Ireland acting through the Department for International Development (DFID). The United Nations Office for Project Services (UNOP) is the fund manager and technical assistance provider for the DFID-SSJP programme. In accordance with UN Security Council resolutions 2182 (2014), 2244 (2015), 2317 (2016), and 2385 (2017) the FGS selected Armament Policy Support (APS, Conflict Armament Research’s not-for-profit organization) to work jointly with it on the JVT. In March 2016, the JVT conducted a preliminary baseline assessment of weapons and ammunition that the FGS had imported into Somalia since the partial lifting of the arms embargo in October 2013. In November 2016, the JVT commenced the verification phase of its work: conducting inspections of weapons and ammunition with deployed FGS and FMS forces in order to verify that weapons imported for the FGS had been delivered to the intended end-users.