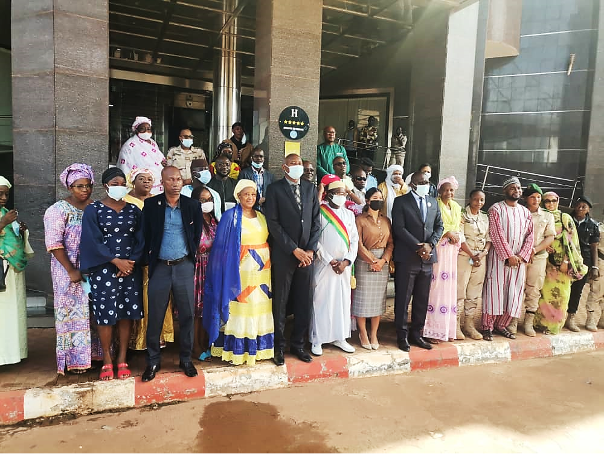 On 6-9 September 2021, the UN Regional Centre for Peace and Disarmament in Africa (UNREC), with funding from the European Union, carried out two workshops in collaboration with the National Commission for the Fight against the Proliferation of Small Arms and Light Weapons (CNLPAL) in Mali and, specifically, a three-day training on gender mainstreaming small arms control and a one-day workshop on gender-responsive monitoring and evaluation of SALW control National Action Plan (NAP). UNREC designed and organized the workshops and facilitated and presented on several sessions, along with UN Women, CNLPAL, DDR National Committee, CONASCIPAL, AFIP and Men Engage. Opening remarks were provided by the EU, the Major of Commune IV, the SP-LPAL and UNREC. Participation in the three-day training (30 participants) and follow-up workshop (18 participants) included the CNLPAL heads of office based in Bamako, Gao, Tombouctou, Kayes and Sikasso, representatives of the ministries for the promotion of women, defence, justice, security, external relations, the central narcotics office, air and border police, DDR Committee, the IANSA local network, among others. The trainings aimed at enhancing participants’ understanding of strategic and technical approaches that could further advance the country’s efforts in these areas.

Through Council Decision (CFSP) 2018/2011 of 17 December 2018 the European Union is funding a project in support of gender mainstreamed policies, programmes and actions in the fight against small arms trafficking and misuse, in line with the Women, Peace and Security Agenda. The project aims to contribute to international peace, security, gender equality and sustainable development by enhancing the effectiveness of small arms control measures through the promotion of approaches based on systematic gender analysis, the integration of gender perspectives and women's empowerment initiatives. The project supports the full and effective implementation of the Programme of Action on small arms and light weapons and contributes to the implementation of the WPS agenda, Goal 5 and 16 of the 2030 Agenda for Sustainable Development and the United Nations Secretary-General’s Agenda for Disarmament. One component of this project is to train national officials in 18 countries (including CAR, Cameroon, DRC, Mali, Sierra Leone and Rwanda) on gender-mainstreaming and small arms control. The technical implementation of the project is carried by the United Nations Office for Disarmament Affairs (UNODA).