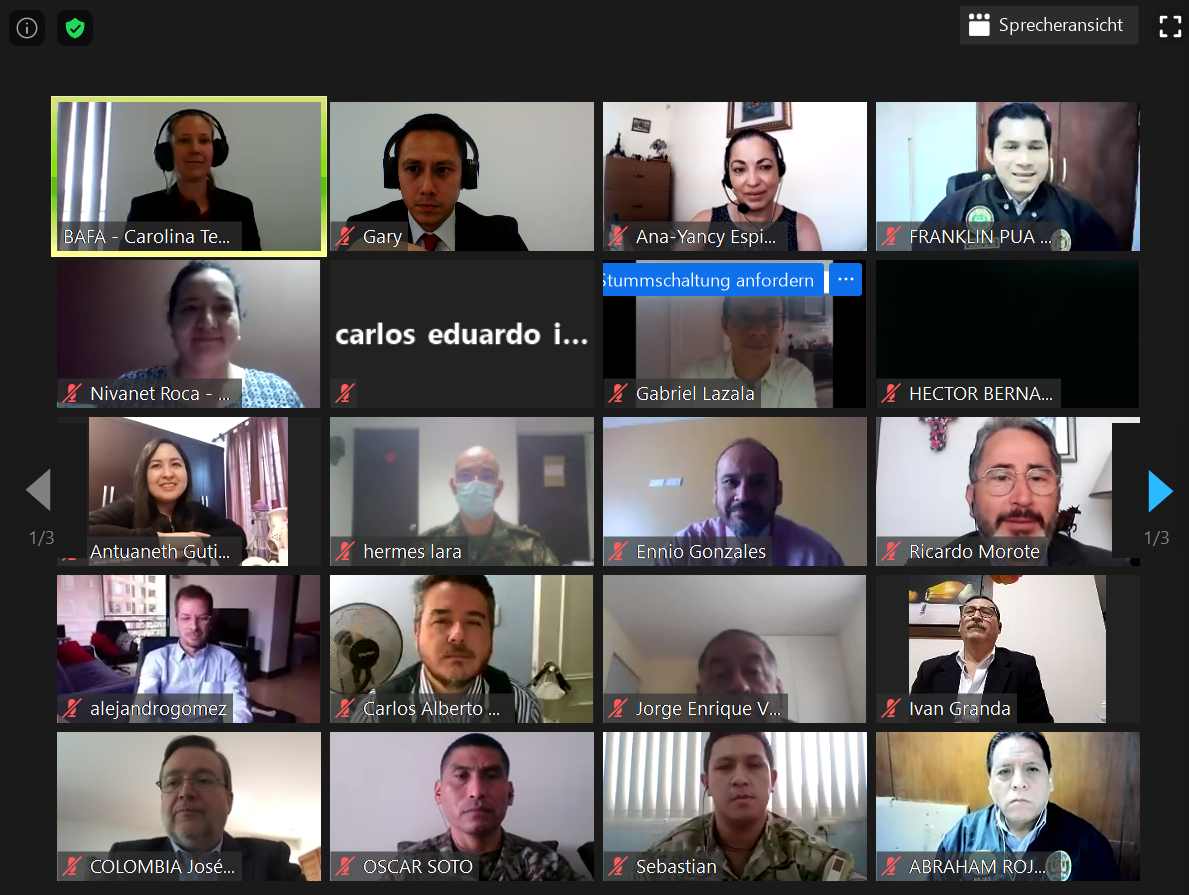 From 25 – 27 August 2020, an Online Activity for Peru and Colombia took place within the framework of the EU Arms Trade Treaty Outreach Project II (EU ATT OP II) based on the EU Council Decision 2017/915/CFSP.

This activity was organised by the implementing entity BAFA and was originally planned to be bilateral with the long-term partner state of Peru. However, based on a proposal advanced by Peru, it was agreed that stakeholders from the neighbouring state of Colombia, also a partner country within the EU ATT OP II, was also invited to participate in the seminar.

The focus of the event was on the general implementation of the Arms Trade Treaty from both a legal and practical perspective. Furthermore, the topic of classification and typology of conventional arms and ammunition as well as the general importance of the role of a national control list was addressed. The seminar highlighted the relevance of implementing Articles 6, 7, 15, and 16 of the ATT. Furthermore, both Peru’s and Colombia’s next steps regarding the implementation of the Arms Trade Treaty were identified. Approximately, 60 state officials from relevant authorities (30 officials from Peru and Colombia each) attended the activity.

During the first day, a presentation was dedicated to the topic of national implementation of the ATT from both a legal and an operational perspective. Subsequently, participants had the opportunity to ask questions that were answered by the expert.

The second day started with a presentation on classification and typology of conventional arms and the role of a national control list. Again, a questions and answers session concluded that day.

The third day of the binational online seminar addressed some of the core provisions of the Treaty as stipulated by Art. 6 (Prohibitions) and 7 (Export and Export Assessment) and their implementation. Furthermore, the importance and opportunities of Art. 15 (International Cooperation) and Art. 16 (International Assistance) of the ATT, respectively, were also addressed.

The activity was supported by three experts in the field of export controls from Mexico, Peru, and Costa Rica, and organised by the implementing entity BAFA (Federal Office for Economic Affairs and Export Control), Germany.